Using PDCA and DMAIC to constantly optimize your processes

Using PDCA and DMAIC to constantly optimize your processes

When it comes to continuous improvement techniques, you have many options. In the case of PDCA and DMAIC it can be extra confusing because they’re quite similar. PDCA (Plan, Do, Check, Act) and DMAIC (Define, Measure, Analyze, Improve, Control) are both problem-solving approaches.

In either case, the goal is to bring structure to improvement efforts and short-circuit the common habit of making changes without a thorough understanding of the root causes of issues.

Organizations like the PDCA approach because it is ideal for incremental improvement. PDCA is often depicted as a cycle. That’s because it’s meant to be something that’s applied over and over again.

PDCA is never really done. (In fact, PDCA is also known as the Deming Wheel or the Deming Cycle.) It can be deployed quickly and is particularly effective for small to medium sized problems. It is a useful way to control trial and error type experimentation within the improvement framework. When PDCA is deployed, organizations can expect a series of quick “wins” that add up to significantly impact business results.

The case for DMAIC

DMAIC comes from Six Sigma and places a heavy emphasis on data. Unlike PDCA, which places the “Do” step second, you don’t get to the action step (Improve) in DMAIC until four steps in.

Because so much effort is put into the preparation part of the equation, DMAIC is perfect for improvement projects that come with big risks or will be expensive to implement. It’s ideal for large or complex problems, especially those that require cross-functional collaboration. It’s also used most often when there is a lot of data to drive decision making.

DMAIC is normally depicted as a flow chart, indicating that it has a distinct beginning and end. Because of the emphasis on data and analytics, the DMAIC approach can span a lengthy period of time. 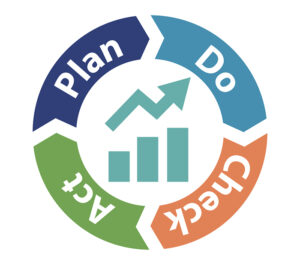 PDCA is a repetitive four stage model (Plan, Do, Check, and Act) used to achieve continuous improvement in business process management and was introduced by Dr. Edward Deming in 1950.

Stages in PDCA form the basis for TQM (Total Quality Management) and ISO 9001 quality standards. This model is widely and successfully implemented in many business areas including but not limited to production managements, supply chain management, project management and human resource management. The following elements should be considered in each stage:

Plan
This is the beginning of the process and the decision-makers should take necessary initiatives to understand the nature of the current inefficiencies in the process and the need for changes. In this stage, it is also important to ask the questions such as what are the best ways to bring about the change and what are the costs and benefits and doing the same.

Check
In the Check stage, the decision makers evaluate whether the intended outcome has been achieved. In order to ‘check’, the actual results have to be compared against the expected results.

Act
The procedure for Act stage depends on the findings in the Check stage. If the Check stage proved that the process improvements were achieved during the Do stage, then the company should proceed to continue to act upon the new processes.

DMAIC refers to a data-driven improvement cycle used for improving, enhancing and stabilizing business processes. DMAIC contains 5 steps that are sequential in nature: Define, Measure, Analyze, Improve and Control. The DMAIC cycle is the central tool used to drive Six Sigma projects. Here are each of the stages:

Define
This involves identifying the problem along with why such improvement is needed. Decision makers should specify clear goals at this stage.

Measure
This stage involves quantifying the issue identified in the Define stage. This is important since it is difficult to understand the amount of resources that will be required to correct the problem without measuring the problem.

Improve
This is the stage where the planned improvements are implemented. Change management skills of the decision makers are important at this stage in order to clearly communicate with the employees who are affected by the change to get their support for the change process.

Control
Control amounts to continuous monitoring of the changes made to ensure that the implemented process change is continued and is reaping the expected benefits as intended.

DMAIC approach is the underlying basis for Six Sigma; which is a technique in management that provides organizations with necessary tools to improve the competence of business processes.

Which is right for you?

Asking which approach is best is a bit like asking if a hammer is better than a screwdriver—it all depends on what you’re trying to fix. PDCA and DMAIC each have a place and there’s no reason your organization can’t use both. Both methods are based on Scientific Method as a way to analyze processes and discover root causes of process issues. They are both concerned with making sure that improvements stick.

Training your team on these—and other improvement techniques is like adding tools to your toolbox. If you have a full tool box you can think about each challenge and decide which one fits the situation at hand.

Watch as Cedro Toro explains how he views the choice between PDCA and DMAIC:

About the Author: keith norris